YOU ARE AT: Business MK > News > Charity celebrates a decade of achievement

Charity celebrates a decade of achievement 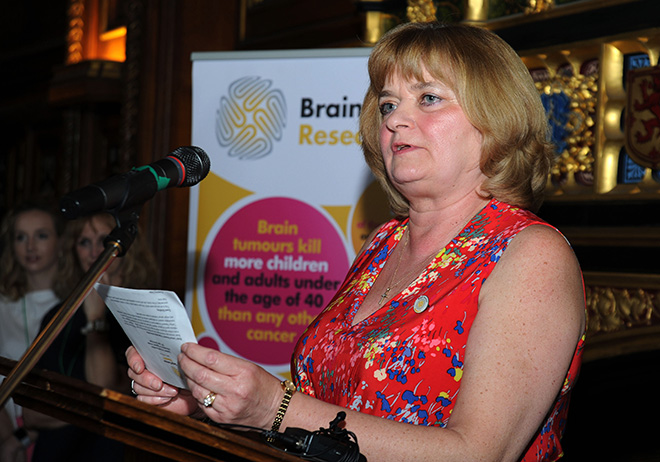 Sue Farrington Smith, chief executive of Brain Tumour Research, at the reception in We

A CHARITY has marked its tenth anniversary with a reception at Westminster to celebrate a decade of collaboration and achievement.

Brain Tumour Research used the occasion to launch its new manifesto Find a Cure which sets out its plans to grow capacity in research into brain tumours, build research infrastructure, accelerate treatment options for patients, and to further increase national investment in the field to £35 million a year by 2025.

Since it launched in 2009, Brain Tumour Research – which is based in Milton Keynes – has:

Brain Tumour Research chief executive Sue Farrington Smith told guests at the reception: “The next decade is set to see huge advances in our quest to improve outcomes for patients and their families and we hope everyone will stay with us as we continue our work to improve treatments and, ultimately, to find a cure for brain tumours.”

The celebration was hosted by the Speaker of the House of Commons and Buckingham MP John Bercow, who led the original debate on brain tumours in Parliament in 2004 and has been a dedicated and committed patron of Brain Tumour Research throughout its first decade.

Among those attending were patients, families, and fundraisers from across the UK whose dedication and hard work have played a crucial role in the success of the charity since it started.

Also in attendance was Milton Keynes South MP Iain Stewart. Representatives of other charities, notably 24 member and fellow charities from across the UK, as well as from Brain Tumour Research, including chief executive Sue Farrington Smith MBE.

She set up the charity after losing her niece to a brain tumour in 2001.

Mrs Farrington Smith said: “We have met so many astonishing, powerful, helpful, angry, devastated, yet determined people. Determined to join us in helping to fund the fight and find a cure for this devastating disease.

“In 2009, 14 brain tumour charities put their heads together to launch umbrella charity Brain Tumour Research with a campaign to raise awareness and increase funding for vital research. The charities highlighted the fact that, despite brain tumours being the leading cause of cancer deaths in children, research was woefully underfunded and a poor relation to other cancers, receiving less than 1% of the national spend on cancer research in the UK.

“Thanks to this collaboration, in ten years we have become a leading voice in the campaign to increase investment in research, created high levels of awareness across the media and amongst parliamentarians, and transformed research in the UK with our model of funding work at dedicated Centres of Excellence.”

There are now 24 brain tumour charities working together under the umbrella of Brain Tumour Research and, between them, income has grown from £1.5 million in 2009 to £7 million funding research and support each year.