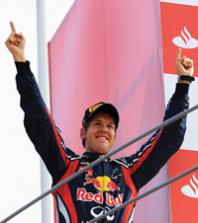 Vettel (pictured) retained his title with a sixth-place finish in the Brazilian Grand Prix – the final race of this year’s F1 season.
He said: “The most important thing throughout the season is that we kept pushing and remained ourselves. We just try to do our thing and stick to the route that we know and that is what made the difference.
“Everyone at Milton Keynes and here at the circuit, they are always pushing so hard and we really stepped up our game in the second half of the season. There is no one in this team that feels more important than anyone else, we all push together, alongside each other.
“It is one big force and I am very proud of that."
Red Bul clinched the constructors’ championship at the previous race in the USA.
Team principal Christian Horner hailed Vettel’s achievement as “phenomenal” and said the newly-crowned champion had been “better than ever” this season.
“An unbelievable end to what has been a really incredible season,” he said. “Over 20 races the team has done an unbelievable job.”