YOU ARE AT: Business MK > News > CBI head receives honorary degree from the University of Bedfordshire

CBI head receives honorary degree from the University of Bedfordshire 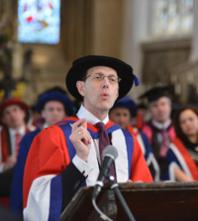 John Cridland, the CBI director general, is the key spokesman for 240,000 members of the British business community and was recognised with an Honorary Doctor of Business Administration for his outstanding contribution to industry and commerce.

Mr Cridland said it was a “tremendous honour and a privilege” to accept the Honorary Degree for his “small achievements”.

On the 50th anniversary of the death of President John F Kennedy, Mr Cridland told students to draw from a quote made by the 35th President, who on Thanksgiving Day once said “we should remember the most important appreciation is not what we say, it is what we do”.
“I hope those words will give all you a little inspiration as what to you might do next,” said Mr Cridland, who lives in Bedfordshire. “Go out into the big wide world and give whatever gift you feel you have to give to the rest of us.
“I have the privilege to speak up for Britain’s entrepreneurs; they are interested in your exams and certificates, they’re congratulatory of your achievements, but what they really want from you is your inspiration, your ideas, your resilience and your comradeship.
“Help business do good for society by going out there with your work.  Help make a difference.”
University of Bedfordshire vice chancellor Bill Rammell said: “John has been rightfully recognised for his outstanding achievements as a champion of the business community, which he also represents as an excellent spokesman.
"He is also a passionate believer in the importance of education as one of the building blocks vital to a sound economy.
“His commitment and focus in these fields correspond with our own aspirations at the University as we look to help bridge the gap between University and the business world through providing transformational education, where students can get first-hand experience of working while they study.”