YOU ARE AT: Business MK > News > CBI head John Cridland to receive honorary degree from University of Bedfordshire 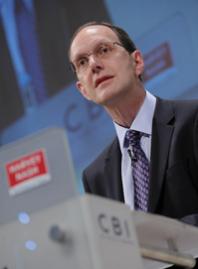 John Cridland pictured, who as the head of the Confederation of British Industry is the key spokesman for 240,000 members of the British business community, is to be recognised with an Honorary Doctor of Business Administration.
Mr Cridland, who also holds the position of UK Commissioner for Employment and Skills as well as having a place on the board of Business in the Community, is a member of the Council of Cranfield University.
He has been linked with education in the past too, having been the Vice Chair of the National Learning and Skills Council between 2007 and 2010.
He also spent ten years on the Low Pay Commission and the Acas Council.
Tim Priestman, projects executive at the University’s Business School, said: “John brings a range of skills and experience not only as a champion and spokesman for thebusiness community as Director-General of the CBI but also through his former association with the National Learning and Skills Council.
“His commitment and focus in these areas matches our aspiration to engage with organisations to help our students bridge the gap between university and work through a transformational educational experience.
"We are proud that he has accepted this Honorary Award from the University of Bedfordshire and to welcome him into our community.”
Mr Cridland will be presented with his award alongside graduands from the Faculty of Creative Arts, Technologies and Science, at a ceremony at St Mary’s Church in Luton, at 10.30am.