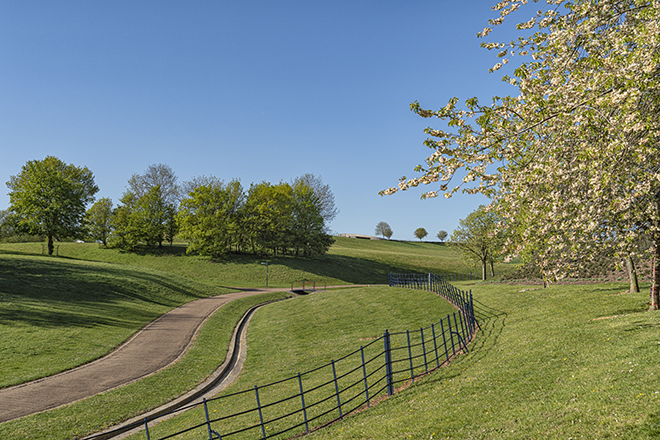 IT IS now, officially, among the finest post-war parks in the UK.

Campbell Park in Milton Keynes is now Grade II listed after being registered as a Park of Special Historic Interest in England by Historic England.

The park is one of four landscapes in the South East to have been granted this protection and added to the Register of Parks and Gardens, which forms part of the National Heritage List for England. It is one of only 20 parks nationally to have received this accolade this year.

It received Grade II registered status for its historic interest and innovative architectural design. Campbell Park is one of the largest parks to be laid out in England in the 20th and 21st centuries. Where its design takes on elements from the 18th and 19th century it fuses them into a contemporary design fitting, says Historic England.

Its listing adviser Michael Bellamy said: “Campbell Park reflects the pioneering spirit of Milton Keynes, connecting the urban centre to the wide, pastoral landscape beyond. It is one of the largest urban park landscapes created in England in the 20th and 21st century and I am delighted to see it added to the National Register of Parks and Gardens of Special Historic Interest.

“The past few months have shown that our parks and outside spaces enhance our lives and are essential for our wellbeing and this recognition will help to protect Campbell Park so that it can continue to be used and enjoyed as it was designed to do.”

Various schemes for the park were created in the early 1970s such as the well-known aerial perspective drawing by Helmut Jacoby and elements from that, such as the belvedere, can be seen in the park today.

However it was not until Milton Keynes Development Corporation appointed Neil Higson as head of the central landscape design team that the master plan for the park was created and subsequently published in 1980.

The park connects Central Milton Keynes to the wider landscape and the expansive linear park network across the city. It is managed by The Parks Trust, the self-financing charity that cares for and maintains over 6,000 acres of parkland in Milton Keynes, which has been its custodians for almost 30 years.

The trust runs and licenses hundreds of events and activities within Campbell Park each year. It has also conserved the park’s biodiversity, including enhancing its wild flower-rich meadows where sheep can be seen grazing at certain times of the year, right in the heart of the city.

Its landscape and operations director Rob Riekie said: “Our team at The Parks Trust have cared for this park for close to 30 years and are extremely passionate about ensuring its longevity for future generations.

“These new protections from Historic England will now help us in doing this while also ensuring we are able to continuously make improvements to the park for the benefit of the city.”