YOU ARE AT: Business MK > News > Call to business to join city’s golden anniversary celebrations 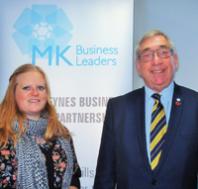 January 2017 marks 50 years since the ‘new town’ received its official designation. The year should also see a bid submitted for Milton Keynes to be European Capital of Culture in 2023 and possibly another bid for City Status from The Queen.

MK50 is the umbrella organisation for a year of golden anniversary festivities. Milton Keynes Council is co-ordinating MK50 and supporting it with £100,000 while looking to attract more funding from the Lottery, trusts and foundations.

Project manager Lallie Davis and senior heritage officer Shane Downer gave an overview of the plans so far when they spoke at a breakfast briefing organised by Milton Keynes Business Leaders Partnership and called on the business community to play its part in the celebrations.

MK50 aims to foster civic pride and bring communities together, said Lallie. The campaign will include a summer of public events reflecting the themes City at Play; New Town and Future City; and Green MK.

“The aim is to have an event in every grid square in Milton Keynes,” she said. Arts and culture organisations in Milton Keynes are getting involved along with parish and local councils, community and sporting groups.

Mr Downer said: “MK50 is not just about arts and culture. It is about how in Milton Keynes we work together to make it a better place to live work and play, to promote the visitor economy in a place where culture and creative industries are the fastest growing sector.”

He said events like MK50, the International Festival   being held again in 2016 and the bids for Capital of Culture and potentially gaining City Status, aimed to counter the sometimes negative perception of Milton Keynes.

“Supporting MK50 is not just about philanthropy but is about benefiting your business through your employees’ involvement and encouraging those with the skills you need to relocate to Milton Keynes,” Mr Downer added.

“We want the business sector to be involved in the strategic thinking around MK50 and I invite those interested in getting involved to contact us.”

MKBLP chairman Dr Philip Smith said: “January 23, 2017 is a very important milestone for Milton Keynes. So much has been achieved, including our undoubted business success over the past almost 50 years.

"We are pleased to acknowledge a team is coordinating celebrations and we support the business community getting involved.”