YOU ARE AT: Business MK > News > Call centre pulls out the stops for Children in Need appeal

Call centre pulls out the stops for Children in Need appeal 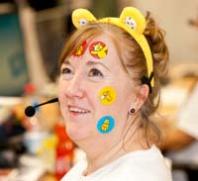 The company volunteered to act as an official call centre for the BBC fund-raiser last Friday. Its staff handled calls donating more than £110,000, while colleagues raised a further £8,259.85 from events during the day.
A total 150 VWFS employees were on site throughout the evening, taking more than 3,400 calls from 7pm to 12:30am.
Some heart-warming stories came to light, including the grandmother who donated £10 in honour of each of her grandchildren and £9.49 from a little girl who had organised a sponsored hairbrush at her school.
Lisa Stacey, joint-managing director of
Volkswagen Financial Services, said: “Since it started, the BBC Children in Need appeal has helped raise over £600 million for worthy causes and everyone at Volkswagen Financial Services is delighted to have had the opportunity to help make this year another success story.”
The total of £8,259.85 from VWFS was raised through activities including raffles, bake sales, a dress down day and a competition to guess how many balloons were in five Volkswagen Group vehicles.