YOU ARE AT: Business MK > News > Businesses are thriving in face of market uncertainty, says report

Businesses are thriving in face of market uncertainty, says report 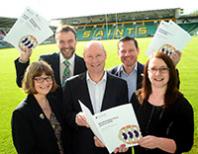 The annual Northamptonshire Limited study, conducted by financial and business advisers Grant Thornton, analyses the performance of the 100 largest, privately owned companies in the county to provide a recognised benchmark of the overall health of the local economy.

The 2018 report findings, unveiled yesterday (Thursday) to more than 100 local businesses at a special breakfast event hosted by Grant Thornton, revealed that combined turnover of the top 100 companies increased by healthy 5.6%, up from £5.6 billion last year to £5.9 billion.

Profits in total rose by an impressive 17.3% from £352 million to £414 million, although there was a greater spread in performance than in previous years with some companies performing exceptionally well, while others found trading more challenging.

Employment in the county is also on the up with the top 100 businesses growing their combined workforce by 9.7% to 34,026 people. However, following last year’s rise, average salaries fell slightly, down 1.6% to £28,710.

Grant Thornton director Mike Hughes, who presented the findings, said: “It has been an interesting 12 months since our 2017 report. While Brexit uncertainties remain, overall the UK economy has performed fairly well with GDP rising and unemployment continuing to fall.

“In addition to Brexit, local businesses have had to deal with a raft of new challenges including the introduction of the ‘sugar tax’, a spate of high profile retail failures and the new GDPR rules around data protection.

“Against this backdrop, it is not surprising that the performance is a little more mixed than we have seen previously with 39 of the 100 companies actually reducing profit. However, there have been some real standout performances and overall we should celebrate the tremendous achievement of Northamptonshire companies in delivering another excellent set of results.”

All sectors reported an increase in profits, highlighting a strong and consistent picture across the board. The standout sector was Business Support Services, which saw the biggest profit rise of 47%. New technology from artificial intelligence to ‘big data’ is radically changing the skills a modern workforce needs to thrive, requiring industry to adapt to survive.

The Automotive and Motor Retail sector saw the smallest profit growth of 2.8% which can partly be attributed to weak consumer confidence and a rapidly evolving market with the shift away from diesel cars and trucks to electric vehicles continuing at a pace.

Mr Hughes said: “With all sectors turning in a positive set of results alongside some real standout performances, this year’s report demonstrates the overall robustness of the Northamptonshire economy.

“While a number of challenges lie ahead, particularly in relation to the final arrangements over the customs union and ongoing skills shortages, businesses have shown they are able to adapt, identify and seize new opportunities for growth.”