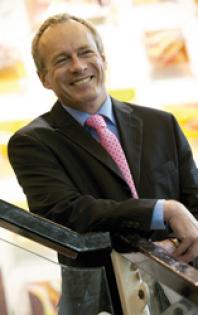 Bedford College principal and chief executive Ian Pryce has been awarded a CBE.

Cheryl Smart, chief executive of Bedfordshire & Luton Chamber of Commerce, receives a MBE.
Bill Parfitt, chairman and chief executive of General Motors UK and who worked for Vauxhall in Luton since 1998, collects a CBE.
Mr Pryce (pictured) receives the award for services to further education locally and nationally.
Since his appointment in 1998, Bedford College has developed from an institution of 5,000 students, 250 staff, operating from three locations and with pass rates in the bottom ten per cent in the UK to become an Ofsted Outstanding Beacon College with 18,000 students, 750 staff, sites in Bedford, Kempston, Central Bedfordshire, Rushden and Luton, and pass rates now in the top 5pc in the country.
Mr Pryce, who also chairs both the local Bedford Business Improvement District and the National Data Service, said: “I always tell anyone I meet I have the best job in Bedford. To get such a senior honour is very humbling.”
He is vice chair of the influential 157 Group of Colleges, a Council member of City & Guilds, a member of the regional CBI Council and a member of the Information Authority. Three years ago he won the prestigious British Quality Foundation national Leadership award, and in 2009 became the first person from the further education sector to be named as a Companion of the Chartered Management Institute.
Mr Pryce said: “It is a great privilege to be asked to advise ministers and senior civil servants, and to be rewarded for just doing my job is a lovely surprise. This vote of confidence will give everyone a boost and make us even more determined to create the world-class college and outstanding local education system Bedford needs and deserves.”