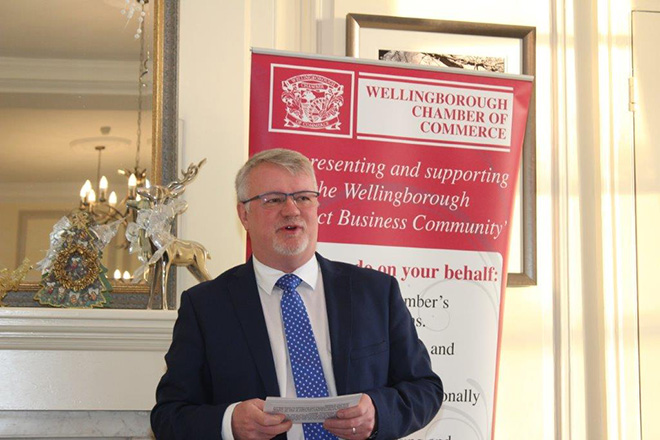 THE POSSIBILITY of further delay to Brexit is stifling growth and severely impacting the UK economy, says a business leader.

Businesses in Northamptonshire just want an end to the process of the UK leaving the European Union with or without a deal, says Wellingborough Chamber of Commerce president Simon Toseland.

He has voiced his concerns following a speech by Brexit Secretary Stephen Barclay, who believes the EU has set Britain a test it cannot meet with its demands to see a replacement for the Irish backstop.

During a speech in Madrid, the minister maintained that the UK should be given until December 2020 to come up with a plan for the Irish border.

Mr Toseland, who is also the founding director of Northamptonshire-based commercial property specialist Prop-Search, said: ‘‘Delays to Brexit are costing this country billions of pounds. The delays also fuel caution and indecision by our businesses, stifling growth and severely impacting on the entire economy.

“While some in Westminster maintain that Brexit will send the UK into a spiral of regression, they clearly fail to see the quite appalling effects of further delays.

“We engage daily with hundreds of businesses in North Northamptonshire, the vast majority of which just want an end to the Brexit process – whether with a deal or without one.

“The government’s approach seems to be one of an over bearing mother trying to hang on to its young, cosseting it in cotton wool and trying hard to keep it from what she perceives to be a danger that, in fact, she has no real understanding of the day to day reality.

In his speech, Mr Barclay argued that the UK should be given another year to find a new policy for the Northern Ireland border following the announcement by Downing Street that it would not be bound by an “artificial deadline” in talks.

“We are told the UK must provide legally operative text by the 31 October. Yet the alternative to the backstop is not necessary until the end of the implementation period in December 2020.

In short, why risk crystallising an undesirable result this November, when both sides can work together until December 2020?”

Mr Toseland said that the government is fixated on its own agenda and is failing to recognise the damage being caused to businesses across the UK.

‘‘In my experience, businesses are far better at business than politicians. We take risks and deal with the consequences. It cannot be the case that mutually consenting adults in business across the EU cannot work together in the future, whatever the circumstances.

“I am concerned that government officials of whatever political persuasion on both sides of the Channel, having little or no experience in running a business, are dragging us all into an unnecessary political pit of financial pain that will take years to climb out of.

“Sometimes, when you make a choice you have to follow it through, even if you have doubts. Indecision gets you nowhere.’’