YOU ARE AT: Business MK > News > Business counts the cost of High Street blaze 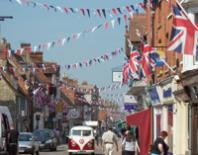 The town’s Business Association has joined forces with the town council and Milton Keynes Council to work with the statutory agencies to accelerate the clear-up of the High Street and inspections of neighbouring buildings.

Several businesses were affected by the fire but, despite part of the High Street being closed, the town has carried on trading.

Stony Stratford Business Association chairman Ross Ellens, whose property Stratford Arcade was damaged in the blaze, said:  “Stony has survived fires in the past.  It is part of the town’s history.  We will rebuild both property and businesses.

“But while commerce is important we should never lose sight of the terribly tragedy which has befallen the Post family whose members lost all their possessions. ”

The family moved into Stony Stratford in January and had planned to renovate their historic Georgian home.

Mr Ellens said: “I know that the community will continue to help them as much as possible,”

Nine fire engines were sent to tackle the blaze, including crews from Northamptonshire and Bedfordshire.

The cause of the fire is now under investigation.