YOU ARE AT: Business MK > News > Business can help to ease homelessness challenge, says councillor 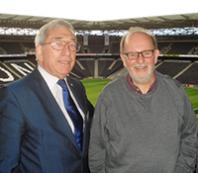 He was speaking at a breakfast briefing hosted at Stadium MK by Milton Keynes Business Leaders Partnership.

High housing costs, homelessness and the spotlight on street sleepers could be preventing some businesses from recruiting and retaining workers, Cllr Long said.

Cllr Long, who also has regeneration and adult social care in his brief, gave business people an update on homelessness and the street sleepers that have attracted media attention and remain a major challenge.

On April 13 there were 646 families with 1,000 children in temporary accommodation, he said. Most of them are in work and the main reason for their homelessness is the end of a private tenancy after a six or 12 month tenancy and being unable to afford housing locally.

The situation has improved on last year and fewer people are being temporarily housed out of area but the main issue, Cllr Long said, is the limited access to affordable housing.

The private rented sector had filled the gap left by council housing, he said.  “We need good private landlords and they have an important role to play in tackling homelessness.”

Cllr Long said he favoured a council house building programme but it was limited by central government caps on what councils can borrow.

“We cannot borrow against our assets which is what the rest of Europe does,” he said.  The lack of affordable housing was impacting on businesses and limiting the labour supply in the city.

“Please speak to your MP about lifting these caps,” he urged business leaders.

Milton Keynes currently has around 130 street sleepers. Some are in work and use tents until they can move into the private rented sector, some are from Eastern Europe.  Some are engaged with support agencies, often for drink and drug addiction as well as housing needs, but others were not.

Under the Housing First approach, with the council and private sector working together, they were getting that support, he said.

During a question and answer session Amazing CMK Business Improvement District chief executive Melanie Beck said it had surveyed employers on recruitment and retention and found the perception of the city and its homeless was putting people off.

“We now see the visible evidence of it much more, in underpasses and doorways across the city.  Nigel has told us about some of the reasons for it and what could be done.

“But affordable homes cannot be built overnight and the tents can take weeks to remove and street sleepers can get the support they need.  All of us, including MK Business Leaders, are concerned that the problem will happen again and again.”