YOU ARE AT: Business MK > News > Broadband plan aims to boost economic growth 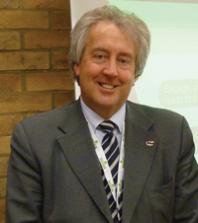 The Next Gen broadband roadshow event, hosted by Milton Keynes Council and held at stadiummk, brought together business leaders from across Bedfordshire, Buckinghamshire and Northamptonshire.
Speakers included:
The discussions covered a wide range of topics relating to broadband and its relevance and importance to Milton Keynes and its future.
Cllr Hopkins (pictured) told delegates: “Next-generation broadband access is the backbone of the envisaged ‘smart’ Milton Keynes. Information and communication technology can enable economic growth, better provision of public services and an improved quality of life for all citizens.”
The event also features workshops and exhibitors from every field within the digital broadband technology spectrum. Many leading local companies were represented at the roadshow and council officers were on hand to answer any questions from the delegates.
Broadband speed is an on-going issue for hundreds of businesses based in Milton Keynes, who say it is not fast enough to cope with business needs and, in some cases, has been detrimental to the growth of their business.
Mr Murphy said BT was upgrading the vast majority of its network and cabinets there would still be some ‘not spots’ which for now would not be upgraded.
Infrastructure investment for the fibre upgrades would come out of the public purse, he added. In Milton Keynes this would partly be funded from a £140,000 share of a national government fund.
The money has been awarded by the Department of Culture, Media and Sport’s Broadband delivery UK team after a joint bid by Milton Keynes, Bedford |Borough and Central Bedfordshire Councils.
To find out more about the broadband roll out inMilton Keynes borough and for further information on broadband visit  www.milton-keynes.gov.uk/mkgrowth