YOU ARE AT: Business MK > Growth Debate > Broadband lobbying makes the right connection 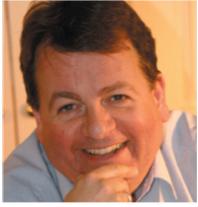 IT IS the season of mellow fruitfulness and so my column will be both fruitful and mellow. I hope.
Milton Keynes, Bedford and Central Bedfordshire Councils have been awarded money from Broadband Delivery UK, the government body that is spending almost £0.5 billion of public money on next-generation access to superfast broadband and signed a contract with BT Openreach to make it a reality.
Milton Keynes has, until recently, suffered from the paradox of being one of Europe’s newest cities while being saddled with among the most Stone Age broadband internet access in the world.
Parts of Milton Keynes had no internet access at all in 2004 and coverage was poor across a swathe from Shenley Lodge and Loughton, through Great Linford, Willen, and Middleton to Old Farm Park.
Where ADSL – asymmetric digital subscriber line, basically broadband through a telephone line – is used, the routing of cables around the grids meant very long runs into the estates and ADSL is distance-limited. This discrepancy and its consequences have inspired much debate and begat lobby groups such as the Milton Keynes Broadband Action Group.
While the layout of Milton Keynes included ducting and cabling for television, it lacked the capacity to be upgraded to digital.
Cable provider ntl – which merged to become part of the Virgin Media Group in 2006 – approached MKBAG to trial a new wireless broadband solution that ultimately would have provided 10Mbps symmetric DSL (with upload speeds equal to download). The trial was a success and the feedback from MKBAG members invaluable but ntl’s financial issues effectively scuppered the project.
MKBAG and Milton Keynes Council lobbied BT hard to trial the best form of fibre optic connectivity in the city and three years ago this was accomplished in limited areas connected to the Bradwell Abbey exchange.
The system is called Fibre to the Premises: glass fibre cable runs to the user’s premises and delivers a guaranteed download minimum speed of 100Mbps. BT has also developed the cheaper-to-install Fibre to the Cabinet, which most know as BT Infinity. This involves fibreoptic cable to above-ground green boxes, using the existing copper cable for the ‘last mile’.
However, when FTTC is the option of choice, it is vital that that last mile really is over copper cables and much of Milton Keynes used aluminium which, although adequate for speech, is useless for data and meant many phone lines could not use Infinity or even ADSL.
Successful lobbying persuaded BT to replace aluminium for copper in affected estates such as Monkston Park. However, despite apparent reluctance, BT was also persuaded to extend its costly fibre trial beyond Bradwell Abbey exchange and to bring forward the fibre enablement of Woburn Sands and other exchanges.
Another anomaly is that national planning laws for new estates did not make any requirement for the builders to talk to BT nor to build the ducting for fibre cables – hence some shocking ‘not spots’ in new developments in Broughton and Walton Grange.
Now a newly awakened council insists on builders making provision for the fastest available broadband and new estates will be enabled from day one.
The actual figures are secret but those who have studied the subject believe that the take-up of fibre once the infrastructure is in place is very high. BT has been encouraged to continue its roll-out here and appears to have prioritised Milton Keynes.
It is likely that in the next six months, Milton Keynes will be in excellent shape with its fibre cable infrastructure and BT will be profiting from the take-up rates. However, there will still be some ‘not spots’ and we all need to continue lobbying the council to maintain progress.
BT might be justified in claiming we are now at about 95% fibre-enabled. If you are in the 5% however, that is not good enough.
Efforts must be redoubled to ensure that some 5,000 houses are not left with appalling connectivity. In theory, this is where the new BDUK money comes in. We shall see.
All in all, however, it is very good news and Milton Keynes is now well on its way to becoming the best connected city in the UK. Once again, Milton Keynes leads the way for lesser cities to follow.
Cheerio.
What’s your view? Have your say – e-mail [email protected]
Business MK October 2013 edition is available now. Read it online. Click here
Business2Business October 2013 edition is available now. Read it online. Click here