YOU ARE AT: Business MK > News > Broadband cable supplier calls for faster speeds across UK 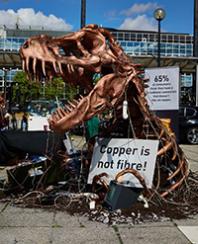 CityFibre is calling on people in Milton Keynes to lend their support to a campaign unearthing the creaking copper infrastructure below their feet, underpinned with new research that revealed 82% of broadband consumers in Milton Keynes feel slowed down by their internet connection.

The call comes following the Advertising Standards Authority’s refusal to revisit its 2017 claim that using the term "fibre broadband" in adverts for part-fibre services is not "materially misleading" – despite the fact that part-fibre connections still rely on ancient copper infrastructure.

CityFibre’s research – carried out by Censuswide on over 3,500 broadband users – has challenged that claim, revealing that a quarter of broadband users in Milton Keynes believe they have a full fibre to the premises service despite this only being available to less than 5% of UK homes.

Once they understood the difference between copper-based and full fibre services, 71% thought the rules should be changed.

Since the launch of the campaign in Milton Keynes at the end of July, nearly 300,000 people have visited the campaign website for information and almost 2,500 people have signed the petition, with 1,000 also writing to the ASA directly demanding a change in the rules on how ISPs can advertise their hybrid-copper services.

Dubbed “Coppersaurus” after the outdated technology on which the UK is relying, the campaign has seen support from BBC consumer rights advocate and presenter of ‘Fake Britain’, Dominic Littlewood.

CityFibre chief executive Greg Mesch  said: “At its heart, this campaign is about making sure the UK gets the world-case connectivity it needs to be able to compete in the global economy. Without a change in the rules, the consumers and businesses across the UK risk missing out on genuinely transformative connectivity, which will change the way we live and work.”

Milton Keynes has benefited from CityFibre’s 162-kilometre fibre network for local businesses to access next-generation internet connectivity, launched in 2016. Now, Milton Keynes has been announced as the first UK city to benefit from a city-wide full fibre roll-out, in partnership with Vodafone.

This means the network will soon be expanded to reach nearly every home and business in the city. Work is now well under way and the first connected customers are already benefiting from affordable ultrafast internet access, says CityFibre.