YOU ARE AT: Business MK > News > Brexit – the worst thing to happen to the UK’

Brexit – the worst thing to happen to the UK’ 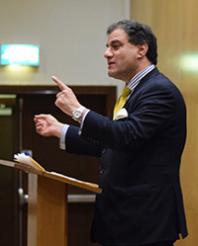 In his view it would be “overwhelmingly better” to remain, he told his audience of almost 100 businesspeople. On every argument, including loss of sovereignty, migration and trade, leaving was not the answer.

“Our laws are predominately made by us, unemployment is the lowest in decades and what would we do without the EU workers’ contribution to the NHS and our universities?”  Lord Bilimoria said. “And I can already sell my beer in pints and litres.”

Despite having been in the EU for 44 years the UK remained the best in the world in many fields. “We can have the best of both worlds.” he said.

Lord Bilimoria, a cross bench peer in the House of Lords, was born in India the son of a senior officer in the Indian Army and attended a Christian school in India.  But, he told Business Leaders members and guests: “I preferred comic books to history books.”

While studying law at Cambridge and playing polo for the university, he saw an opportunity to import Indian-made polo sticks.  In 1989 he found that lager sold in UK Indian restaurants was too gassy, sourced a Bangalore brewery to make a beer that had the taste of an ale without the gas of a lager and distributed it around London in his car.

By 2007 Cobra beer was being sold around the world. In 2009 Molson Coors took a controlling stake for £13 million with Lord Bilimoria as chairman.

He spoke of his pride at being made a life peer in 2006.  “No house of a parliament in the world has the depth and breadth of expertise that is there,” Lord Bilimoria said. “I am sad at the bad impression people have of it.”

He said the UK university sector is the jewel in the country’s crown, “But a university education is not valued enough.” In the light of the current challenges facing the Open University in Milton Keynes, Lord Bilimoria said: “It saddens me to see what is happening to The Open University.  It is one of the best universities in the world.”

Asked what could bring a divided country together and could the referendum decision on the UK’s future in the EU be overturned, Lord Bilimoria said: “It was always going to be divisive but I never expected the division we have now.”

With regard to a second referendum on the deal struck between the UK government and Brussels, he added: “People have to have a say on any deal.  That is respecting democracy.”