YOU ARE AT: Business MK > News > Brewing industry pays tribute to a ‘champion’ MP 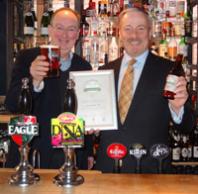 He is pictured (right) with Paul Wells, chairman of Bedford-based brewery and pub operator Charles Wells, after receiving the Beer Champion award.

The award is a joint initiative by the Campaign for Real Ale, the British Beer and Pub Association and the Society of Independent Brewers. Set up last year, it aims to recognise MPs who supported Britain’s national drink during 2013.

Mr Puller, MP for Bedford and Kempston, was nominated for his support in scrapping the Beer Duly Escalator and the cut in Beer Duty announced in the 2013 Budget.

Previous increases totalled 42% over the previous four years, says the BBPA. All three bodies joined forces again this year to campaign for a freeze in duty. In his Budget statement in March, Chancellor of the Exchequer George Osborne announced a further reduction equating to 1p a pint – the first time that beer duty has been reduced two years running.

Mr Wells said: “Brewing and pubs are vital to the local economy in every part of the country. We are fortunate that our MP, Richard Fuller, understands the economic and social impact of beer and pubs to the local area and we appreciate his support in the campaign to curb further rises to the already heavy tax burden faced by brewers and pub licensees.

“With the abolition of the Beer Duty Escalator in last year’s Budget and two successive reductions in duty, we have been more confident about the future of the industry and been able to commit investment into long-term business plans.”

More than 1,650 jobs in Bedford alone rely on the brewing and pub industries, contributing over £33 million a year to the economy.

Mr Fuller said: “The brewing and pub sector is a dynamic part of the Bedford economy that creates jobs and is at the centre of the hospitality industry, our cultural heritage and the social life of every community.

"By supporting the Budget campaign last year and this, I was only too pleased to represent so many of my constituents who enjoy our national drink.”

Campden BRI which provides research, analysis and consultancy to the brewing industry worldwide, also created a special limited-edition bottled beer for Parliament to mark the award.

BBPA chief executive Brigid Simmonds said: “I want to thank Richard Fuller MP for making a huge difference in achieving the historic duty cuts in 2013 and 2014 by drawing attention to the harm caused by the tax increases that amounted to 42% over four years.

"We are delighted that Charles Wells has been able to represent us all in honouring this achievement in the best way possible – with a great new beer.”