YOU ARE AT: Business MK > News > Brewery is a toast to the city

Brewery is a toast to the city 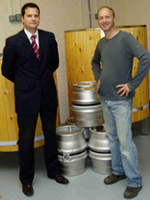 Aptly named after the famous local landmark, The Concrete Cow Brewery is now producing real ale, made with traditional ingredients to Danâ€™s own recipes.

Although brewing is an ancient industry, the unit has been fitted out with modern brewing equipment. Mr Bonner, who decided on a radical career change after several years as a landscape gardener, said; “The business is classed as a micro-brewery, small beer but large enough to be commercially viable.””

One, a mid-strength amber bitter with a spicy aroma, is called â€˜Cock and Bull Storyâ€™ after the pubs in Stony Stratford. The second is â€˜Midsummer Aleâ€™, a pale thirst-quenching beer with citrus notes.

The Concrete Cow Brewery will be selling its cask beer to local pubs, and will also bottle its brews to sell at local events, beer festivals and Farmersâ€™ Markets.

Mr Bonner secured the unit through agents Douglas Duff. Surveyor Graham Young said: “”The units at the Bradwell Abbey employment area are extremely versatile, ideal for people with the entrepreneurial spirit which thrives in Milton Keynes.””