YOU ARE AT: Business MK > News > Brewer raises a glass to international success 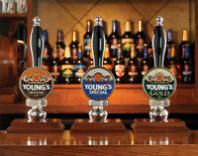 The Bedford-based company is rated 194 after seeing sales rise from £7.9 million in 2009 to £10.9 million two years later. Charles Wells subsidiary the Wells & Young’s Brewing Company has a thriving export division and the Charles Wells Pub Company is planning further expansion after opening its eighth John Bull pub in France.
Touch economic conditions in the UK have forced Charles Wells to develop the export side of its business, said chairman Paul Wells. The company has developed a new range of beers for overseas customers.
Mr Wells added: “The UK is a challenging economy at the moment so we have put a lot of effort into exporting for both our traditional beers and our pub know-how.  We are pleased to have been listed as it demonstrates the strength of our business in a number of different markets.”
He paid tribute to staff at the firm’s Bedford headquarters who had developed new beers and styles to bring a taste of the British pub to different markets.
“We have two exports that have made a great impression with our overseas customers – a fantastic range of traditional beers and the unique English pub,” said Mr Wells.
“We have worked hard to bring the same quality and standards that we have in the UK to overseas markets so that all our customers can enjoy the authentic taste and atmosphere they would find in this country.”

Charles Wells is the only brewer to be included in the International Track 200 list.