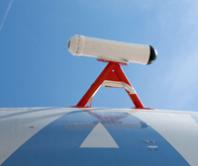 They and their partners Airbus and Nicarnica Aviation generated an artificial ash cloud up to 800 ft deep over the bay of Biscay by releasing a tonne of volcanic ash from an Airbus A400M aircraft.
They then flew an Airbus A340-300 fitted with the pioneering AVOID sensor pictured towards the ash cloud. The device, which is designed to alert pilots to an ash cloud in time for them to plot a route around it, identified the ash from distances of 60km as well as accurately measuring its concentration.
easyJet has begun work on plans to install stand-alone AVOID units on some of its current fleet of aircraft by the end of 2014.
The results will mean no repeat of the airline chaos caused by mean we should not encounter the widespread air space closures of 2010 due to ash hurled into the atmosphere by the eruption of the Eyjafjallajokul volcano in Iceland in 2010.
easyJet engineering director Ian Davies said: "The threat from Icelandic volcanoes continues and so we are delighted with the outcome of this unique and innovative experiment. Finding a solution is as crucial now as ever to ensure we never again see the scenes of spring 2010 when all flying ceased across Europe for several days.
"This is a key step in the final journey of testing the technology and moving towards commercial certification. easyJet will now work towards a non-integrated stand-alone system which we aim to fit onto a number of our current fleet of aircraft by the end of 2014."
The inventor of the AVOID technology, Dr Fred Prata of Nicarnica Aviation, said: "The team has just executed a unique scientific and engineering experiment conclusively demonstrating that low concentrations of ash can be identified by the AVOID sensor.
"The highly successful outcome of this complex experiment is a testament to the commitment and skills of easyJet and Airbus engineers and a great example of industry and science coming together to solve an important problem."
The ash used in the test was from the 2010 Eyjafjallajokul eruption. It was collected and dried by the Institute of Earth Sciences in Reykjavik. easyJet then collected it and flew it to Toulouse.
The AVOID system is similar to weather radar already fitted in commercial airliners today. Using infrarad technology, the system supplies images to pilots and an airline’s operations control centre that enable pilots to see an ash cloud up to 100km ahead of the aircraft and at altitudes between 5,000 ft and 50,000 ft.
On the ground, the information helps to build an accurate image of the volcanic ash cloud using real time data. This could open up large areas of airspace that would otherwise be closed during a volcanic eruption.
Scientists in Iceland have warned of a “high” risk of another major eruption. The island experiences a major eruption on average every five years, with the Eyjafjallajökull eruption the eighth since 1970.
“It is not possible to predict when or where the next eruption will take place, said Magnús Tumi Gudmundsson of the Institute of Earth Sciences in Iceland. “What is certain is that it will happen.”