YOU ARE AT: Business MK > News > BID vote will bring £2.5m funding into Bedford town centre 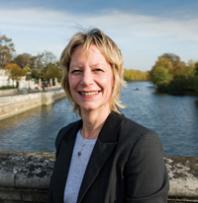 The money from businesses is managed by businesses and is used to promote the town centre to prospective visitors. It operates under the marketing brand of Love Bedford.

Director Christina Rowe (pictured) said: "Times are getting tougher and the local council admits it does not have the funds to push the town centre. A BID means businesses can work together to help the town centre thrive.

“The bigger businesses effectively subsidise the smaller independent outlets via a BID to increase footfall in town for the benefit of all. Without a BID there would no way of raising such a sum."

Bedford was the first county town in the UK to vote in a BID in 2005, under the late Mayor Frank Branston. The local MP at that time, Patrick Hall, was part of the Labour Government which agreed the legislation governing BIDs. Since then the coalition Government has given its backing to BIDs as a way to save town centres.

In Bedford only those businesses with a rateable value of £8,100 or more pay the levy which equates to 2% of their rateable value. This is in addition to business rates but the levy goes straight into a pot managed by a board of levy-paying businesses.

The BID is not run by the council, but as a town centre property owner, the council pays a levy and has a seat on the Board.

Projects and campaigns run under the Love Bedford banner are outlined on the BID website www.lovebedford.co.uk

An AGM will be held of the BID at which new Board members will be elected.