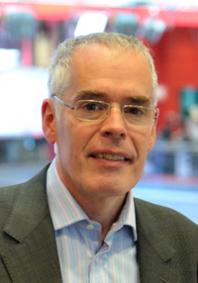 Mr Horrocks (pictured) replaces Martin Bean, who leaves at the end of this month, and will take up his post in May.

He has led the BBC’s international news services across radio, television and online after a career with the corporation spanning more than three decades.

Mr Horrocks said: “I have seen first-hand the transformative power of learning around the world, especially when coupled with technology. The Open University has been making a life-changing difference to hundreds of thousands of people by providing them, through distance learning, with an education that may otherwise have been unattainable.”

Richard Gillingwater, the OU’s Pro-Chancellor Designate and chair of the selection panel, said: “This appointment is great news for The Open University. Peter’s impressive list of achievements, along with his clear passion for the OU made him the stand-out candidate in a very strong field for this role.

“Like the higher education sector, the BBC has had to adapt to new ways of working and funding over recent years, so Peter brings with him not only a wealth of relevant experience, but the drive, vision and intellect to lead the OU into the future.”

Mr Horrocks joined the BBC in 1981 and has edited a number of the corporation’s flagship news and current affairs programmes such as Panorama and Newsnight, before moving on to become Head of TV News.

In 2009 he was appointed Director of the World Service, overseeing a global workforce of 3,000 staff and delivering news to over a quarter of a billion people every week.

During this period he has led negotiations with government over future funding for the World Service, driven a 50% increase in revenues of BBC World News and BBC.com and successfully implemented a change programme to deliver content on all platforms, including TV and online.

Departing Vice Chancellor Martin Bean, who is returning to his native Australia for a role with RMIT University, said: “The OU is an institution of which the UK should feel rightly proud. It has been transforming lives for decades and, like the BBC, holds a special place in our national heritage.

“While I will miss the university a great deal, I am delighted that it will be in such capable hands, and I wish Peter well as he takes up one of the best jobs in the world.”

BBC Director General Tony Hall said: “Peter Horrocks has had a long and distinguished career at the BBC. His intellect, integrity and leadership skills were invaluable during his tenure as Director of the World Service Group. I wish him every success in his new role as Vice-Chancellor of The Open University.”

Mr Horrocks said: “It is a profound honour to be joining an organisation with such an inspiring mission and at such an interesting time for the sector.

“I can’t wait to get started and to meet the staff and students who make the OU so special.”