YOU ARE AT: Business MK > News > Bank opens customer service centre as part of expansion plans 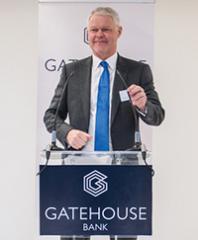 The bank, based in London and which prides itself on its ethical Shariah-compliant standards, has opened the centre at Caldecotte Lake Business Park as it begins a focused bid to grow its home finance business.

It is backed by investment from Kuwait and says the new office is integral to ambitious growth plans, which include a new strategy focusing on the introduction of home finance in addition to its current buy-to-let products and successful development/build-to-rent division.

Speaking at the official opening, chief executive Charles Haresnape pictured said: “We have big plans for Gatehouse Bank and our new Milton Keynes office will be key in helping us to achieve them.

"We are seeking to grow all areas of the business but Shariah-compliant home finance will be a particular focus. We believe this is a hugely untapped market and one that, being fundamentally ethical, will resonate with Muslims and non-Muslims alike.”

The UK is one of the leading markets for Sharia-compliant finance outside the Arab states. The bank had considered other major UK locations, including Manchester and Birmingham, before deciding on Milton Keynes.

“It ticked all the boxes,” Mr Haresnape said. “It is a great location.”

The new office will accommodate a growing team as the bank steps up its recruitment drive in the months ahead, he added.

Gatehouse Bank and Group chairman Fahed Boodai told guests: “I applaud the choice of location and am delighted to see the continuing inward investment from Kuwait into the UK.

"I see more opportunity in the future to work together, whether it be build-to-rent, commercial financing or the development of the Shariah-compliant home finance market.”

Graham Stuart, Minister for Investment at the Department for International Trade, said: “As an international economic department, DIT is working closely with the rest of government to ensure the UK builds on its position as a leading market for Sharia-compliant finance.”