YOU ARE AT: Business MK > News > Away the lads! Hero skipper returns to Newcastle

Away the lads! Hero skipper returns to Newcastle 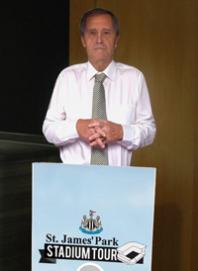 For the club has become one of the first to enhance its stadium tours with the introduction of a Virtual Assistant in the shape of former skipper Bobby Moncur.

‘Bob’ is situated at the starting point of the tour to greet visitors and imparts key information about the itinerary and the club’s 122-year history.   Considered by many as one of Newcastle’s finest ever captains, Moncur made his debut at the club in 1963 and played 361 games before joining Sunderland in 1974.

The VA has been created by Milton Keynes-based Tensator, which already supplies similar Virtual Assitants to airports and retailers. Newcastle Utd is the first UK football club to employ a VA, said Tensator’s head of media Ajay Joshi.

Moncur is probably best remembered by the fans for the hat trick of goals he scored in the 1969 Fairs Cup Final, which helped to secure the trophy for United.

The club’s stadium tours controller Gill Hillary said: “The Virtual Assistant is a massive hit with our visitors. From the young to the old, everyone is amazed when watching the image.”

The VA has a footprint of just 50cm x 50cm and can be easily moved to almost any position throughout the stadium.  Completely customisable, it can be designed to fit any brand image and messaging.

Queue management specialist Tensator has also installed Vas recently at London Heathrow’s Terminal 4, at Kings Cross station and for BMW specialist, Sytner to help with the launch of the new BMW i3 in London.

Mr Joshi said: “Newcastle Utd is the first UK club to introduce a Virtual Assistant and the feedback from the fans has been extremely positive. ‘Bob’ is helping to bring the club’s messages to life and is really engaging with fans to enhance the tour experience.”

Gill Hillary added: “This is an excellent way to get information across because it is so unusual that everyone is engrossed in it. Using the Virtual Assistant at the beginning of the tour has been a huge success as it gets the tour off to a perfect start.”