YOU ARE AT: Business MK > News > Automotive parts manufacturer opens doors to public 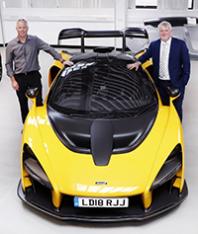 Crosby Composites excels in the design and manufacture of high quality carbon fibre parts for use in Formula 1, motorsport and the automotive industry.
Visitors to the Denington Road production facility were given an exclusive insight into the live production environment at an event to celebrate and promote thriving business in the town, jointly presented by Wellingborough Chamber of Commerce and Crosby Composites.
Crosby’s managing director Paul Field treated spectators to the unveiling of three McLaren supercars, including McLaren’s hyper car – the Senna, built utilising Crosby manufactured components
The event included a tour demonstrating the processes involved in taking the raw materials through to finished products.
Chamber president Simon Toseland said: “This event has been hugely successful and demonstrates the diversity of business in our town – it’s not all about logistics. We’ve seen significant growth in the manufacturing and service industry sectors over the last three years.
“Wellingborough’s location in the centre of Northamtponshire, the expansion of the housing and commercial property markets and first class leisure facilities, such as Rushden Lakes, all combine (along with the rail link into London St Pancras) to make the town a prime location for future growth.”
Mr Field added: “Eight years ago Crosby secured its first major automotive contract and demand has increased hugely since that milestone. Our manufacturing facilities were solely based in Brackley, so it became necessary to expand productive capability and we evaluated where a second factory should be located.
“Crosby settled on Wellingborough due to the supply of labour, excellent road infrastructure and affordable housing for staff.”
In 2015, Crosby Composites purchased a second facility in Wellingborough. After an eight month refurbishment and initially with only five staff, the company started to manufacture automotive parts. The site now employs 100 staff with more than 70 per cent of trained following local recruitment campaigns.