YOU ARE AT: Business MK > News > Artists pay tribute to Sir John Dankworth 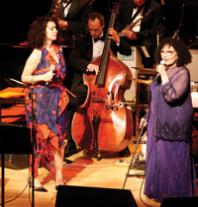 His widow Dame Cleo Laine, daughter Jacqui, son Alec and granddaughter Emily Dankworth gave the performance of their lives. Despite the heartbreak of knowing that John had passed away earlier that day, his family (pictured on stage) paid him the highest tribute by singing their hearts out in the place that is and will always be alive with the spirit of Sir John Dankworth CBE.
The all-star concert, compered by TV and radio presenter Paul O’Grady, featured British stars from stage, screen and music including Prunella Scales and Timothy West, Maureen Lipman and Victoria Wood.
The Stables is the home of the Wavendon All Music Plan, a charity founded by Sir John and Dame Cleo in 1969 with the aim of helping people broaden their views about music through performance and musical education.
From its early beginnings – in an old stable block – and the first public performance on February 6 1970, the venue has grown in size and stature and is now internationally renowned and ranked as one of the top ten music venues in the UK, presenting more than 350 concerts each year.
The Stables has hosted world-famous artistes, from Vladimir Ashkenazy to Jamie Cullum, and some of today’s top professional musicians and singers have benefited from its education projects in the early stages of their careers.
WAP chairman Stephen Clarke  paid tribute to the inspiration that Sir John has provided not only to the organisation, but to the many established and emerging artists who worked with him over the years.
He said: "John and Cleo had the vision in 1969 to convert the stables at the end of their drive into a performance venue with a diverse programme of musicians and for audiences of all ages. Their continued support and that of their many friends and volunteers has enabled The Stables to become the outstanding venue that it is today.
“It is a fitting tribute that on the day of Sir John’s death that we celebrated on stage the 40th anniversary of The Stables with some of the many artists who have performed with Sir John at The Stables. Sir John’s passion for good music will remain the organisation’s guiding principle and the Stables his enduring legacy."