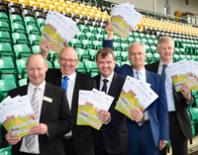 Now in its fourth year, the Northamptonshire Limited study, conducted by financial and business advisers Grant Thornton, analyses the performance of the 100 largest, privately owned companies in the county to provide a recognised barometer of the overall health of Northamptonshire’s economy.

For the first time this year, the report also includes a Growth Index, looking at the 25 highest profit growth companies in the top 100, plus a ‘ones to watch’ section profiling 20 emerging companies.

The report findings, unveiled to local business leaders at a breakfast event hosted by Grant Thornton at Northampton Saints Rugby Club, revealed the combined turnover of the 100 companies increased by a healthy 8.6% from £5.6bn to £6.1bn.

Earnings before interest, tax, depreciation and amortisation also grew by a huge 23.5% to £536 million with significant investment in new staff demonstrated by an 11.2% increase in employment to 32,032.

Mike Hughes, advisory director at Grant Thornton’s Northampton office, who presented the findings said: “Northamptonshire’s businesses have continued the positive progress they demonstrated in our 2015 report, particularly in terms of profitability.

“Last year’s investment has given many businesses significant firepower to expand, either through M&A or organic growth. It is clear the county’s top 100 businesses are continuing to enjoy a healthy and robust trading environment and are looking confidently to the future.

“Interestingly, our report also shows that SMEs achieved a higher rate of turnover growth than large corporates – 12% compared to 7.3% – underlining the adaptability of smaller firms and their importance to the local economy.”

All eight sectors grew turnover and six reported an increase in EBITDA, highlighting a strong economic performance across the board.

The standout sectors were Property & Construction, which saw the highest increase in turnover of 33.6%, and Industrial Manufacturing, the largest sector by number of companies, which reported a huge growth in EBITDA of 80.7%.

However, the Food, Drink and Leisure sector, the largest sector in terms of turnover and employee numbers, continues to struggle, with turnover growth of just 0.1% and a 4.4% fall in EBITDA.

Mr Hughes said: “It is encouraging to see growth spread across the majority of sectors, highlighting a robust and resilient economy.

“This has been boosted by some real stand-out performances from individual businesses with 10 of the top 100 firms increasing EBITDA by more than 50% and 18 new companies entering the top 100.

“More than half of the companies in the top 100 increased average remuneration. With the current nationwide skills shortage it is important that local businesses continue to invest in their staff as part of the ongoing battle to retain and attract talent.”