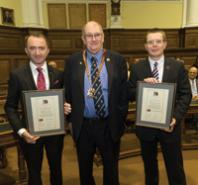 It is preparing to challenge for third consecutive world championship as the new season begins.

Mercedes AMG High Performance Powertrains is based at Brixworth, with the Grand Prix division headquartered at Brackley.

Both sites were presented with certificates for bringing prestige to the county: Brixworth for its excellence in the development and manufacture of Formula One Power Units and Brackley for success in Formula One.

Cllr Larratt said: “As chairman of the county counci,l I thought it was important that two county-based companies should be recognised for some very significant triumphs in the field of motorsport.

“The Mercedes-Benz team based in Brixworth and Brackley has achieved incredible success on the global stage and this helps bring a very positive focus on Northamptonshire.

“The team members, many of whom live in the county, have worked enormously hard towards this success and it is fitting that an official tribute is made to congratulate them.”