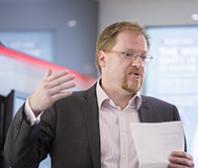 The Silverstone Technology Cluster VIP Lounge, in association with Silverstone Park, will be a focal point of the show at Birmingham’s National Exhibition Centre – the UK’s largest annual gathering of advanced engineering professionals. The two-day show begins today (Wednesday).

Each of the STC’s founding members, as well as its chief executive Pim van Baarsen pictured, will be present at the Lounge on both days. The Lounge will act as an ideal location for figures from all corners of the advanced engineering spectrum to network.

Roger Atkins is a consultant to many motor manufacturers in electric vehicle technology. Via his business, EV Outlook, his online blogs have gained him 150,000 followers.

Kieron is Managing Director of leading engineering consultancy KW Special Projects and Rob MD of computational fluid dynamics and aerodynamics specialist TotalSim. Both companies are based in Brackley, Northants.

Stephen and Roger will give presentations between 12.30pm-1.00pm on the Wednesday, with Kieron and Rob appearing at the same time on the Thursday.

STC is a not for profit company, launched in December 2016, to promote the region within an hour’s radius of Silverstone Park – identified in a high profile SQW report as being home to around 4,000 companies with exceptional capabilities in high-tech engineering, and recognised by the UK government as having ‘latent potential’.

Alison Willis, Divisional Director for the Show’s organiser Easyfairs, commented: “We are delighted to welcome the Silverstone Technology Cluster, in association with Silverstone Park, as key partners at this year’s Advanced Engineering.

Mr van Baarsen said: “Stephen, Roger, Kieron and Rob make for a very dynamic line-up of speakers – for any audience they bring great experience, insight and huge success across a variety of engineering sectors.

“We invite all companies and visitors at the Show to come and hear what they have to say and also to use the VIP Lounge as a place to network and do business.”