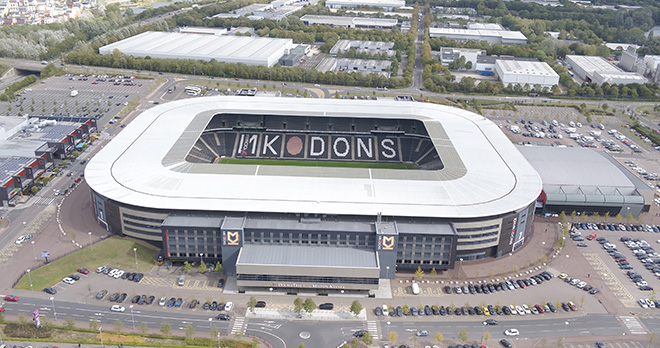 A PILOT scheme to create and test mobility services using 5G technology is set to begin at Stadium MK.

Milton Keynes Council has secured more than £4 million of new funding, including £2.3 million from the government for the project which will pave the way for the new technology at stadia and other venues across the UK.

The funding will be used to create driverless shuttles and road vehicles for moving people and goods across the stadium site. It will also test autonomous surveillance vehicles and drones for enhancing security and will test robots and drones for goods delivery and hospitality use.

The initiative builds on a £10 million investment already made by SEMLEP, industry and academic partners.

Council leader Pete Marland said: “This is another important step in Milton Keynes’ journey as a modern, sustainable and forward-looking city for the future. Smart city projects like ours can do a lot to inspire and empower other major venues around the world to create better, greener experiences for visitors and staff, and boost their efficiency.”

The project at Stadium MK, home of Milton Keynes Dons FC, will start in February and run until March next year.

MK Dons director John Cove said: “We are delighted that the MK5G Create project has been selected to receive support from Department for Culture, Media and Sport. We have been able to bring together a world-class team to integrate and exploit 5G capability in a dynamic real world environment.

“This will truly demonstrate how Stadium MK, working with MK Council and our partners, can use new technology to support a major international sporting and cultural venue.”

Matt Warman, the digital infrastructure minister, expects the pilot scheme to demonstrate the “exciting future ahead” for Britain’s biggest stadia.

“I look forward to sharing the valuable insights gained from this trial with venues across the country.”