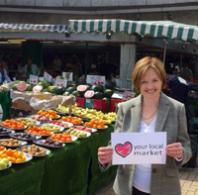 Speaking during Love Your Local Market fortnight, Cllr Edith Bald said she is determined to push for the standard rate parking and a high-profile marketing campaign to increase footfall, despite her party failing to take control of the council at May’s elections.

The Conservatives’ election campaign included promises of a campaign to attract visitors from across the region and to restore standard rate parking around the market. The pledge received support from market traders who have seen a significant drop in footfall since parking charges were increased.

Cllr Bald pictured said: “Sadly, as the Lib Dems have joined with Labour to keep us out we will not have the chance to follow this pledge through. However, I want to assure shoppers and market traders that I will do what I can to keep this on the agenda.

“Many people rely on the market for their day to day shopping, especially food and for the traders the market is their livelihood.”