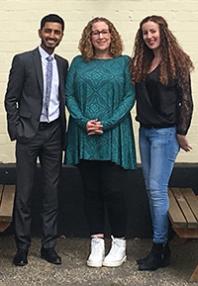 Jo Carter and Sarah Smith, who own Nelson Sisters Ltd, have purchased the freehold for their pub, restaurant and B&B venue The Dukes, after securing £455,000 of funding from NatWest.

The pair took out the leasehold after becoming aware of the space when they enjoyed a christening party there when it was functioning as a Thai restaurant.

The restaurant closed in 2014 and after lying derelict the sisters took on the task of bringing the Grade II listed building on Leighton Road back to life.

Using their own capital to fully refurbish the building, along with the help of the Leighton Buzzard community who donated their time to help restore the former church to its 18th-century roots, they opened The Dukes in April last year.

The sisters have since created nine jobs and supported an apprentice.

Jo said: “It was Sarah’s idea to start the pub and when she asked me to get involved I immediately said yes. Both of Sarah’s daughters had christening parties there so as well as being a beautiful building, there is also the family connection.

“The whole village was excited at the reopening of The Dukes and it was a great feeling to let them know we will be sticking around after purchasing the property.

“We invested a lot of our own time and money when we first took on the leasehold but now, thanks to NatWest, we have been able to secure the funding we need to actually own the whole building – making all the blood, sweat and tears worth it!”

NatWest relationship manager Addy Ashton (pictured with Jo and Sarah) said: “Sarah and Jo are great examples of women in business. Myself and the bank have been proud to work alongside them as they turned their ambition into reality.

“The community’s positive response to the new pub has made all their hard work worthwhile and we wish them every success in the future.”