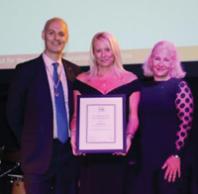 She flew to Brussels to collect the award at the Council for Advancement and Support of Education’s conference. Her work leading the 600 Campaign has led to the building of The Discovery Centre and will transform the school’s sixth form and sporting facilities.

Jo (pictured, centre, with executive director of CASE Europe and CASE president Sue Cunningham) said: “It is the first time that fundraising and development in a UK state school has been recognised in this way so it is a big tribute to the success of the 600 Campaign and everyone at RLS who is contributing to it.”

Headteacher David Hudson said: “The success of the 600 Campaign is built on her inspirational approach, hard work and ability to bring a vast range of supporters, new and old, to the school’s aid.”

600 Campaign patron John Bercow, Buckingham MP and Speaker of the House of Commons, added: “Jo is a true asset to both education and fundraising. I am delighted to see her win this award in recognition of her considerable efforts and the very real impact they are having on the school community and beyond.”