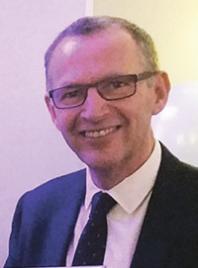 In honour of these achievements, the city’s official tourism organiser Destination Milton Keynes has awarded one of the lead members of the team that bought RWC2015 to the city its highest award.

Milton Keynes council director of strategy Geoff Snelson (pictured)  was made DMK Ambassador at the organisation’s event at the Mercure Parkside hotel in Woughton on the Green to celebrate Milton Keynes’ 49th birthday.
Only two people have previously been awarded the honour, the recipients being those who  have made a real difference to the vitally important visitor economy. Last year, Milton Keynes City Orchestra chair Marian Livingstone received the Ambassador award.

"He led the internal team of council staff who made sure all the unglamorous but critical work was done behind the scenes and at the same time stepped up to the plate to answer any tricky questions about roads and disruption asked by anxious residents.

“The event was a triumph in no small measure due to the quietly authoritative and persistently passionate way Geoff lead the team. He is a true advocate for the city in some many innovative ways and DMK is proud to recognise him as DMK ambassador 2016.”
Mr Snelson said: “I am very honoured to receive this award which is testament to the hard work on Rugby World Cup 2015 by a team of quality people, drawn from organisations across Milton Keynes, including great work by Destination MK and its members.

“Our collective success demonstrates we have the ambition, the quality, and the people in Milton Keynes to achieve even more together.”

To find out more about Destination Milton Keynes visit www.destinationmiltonkeynes.co.uk