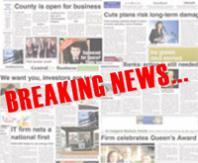 Milton Keynes magistrates sent Gaby Lama to prison for 84 days after hearing that he owned £29,823 in unpaid business rates from April 1 2013 to March 31 this year.

Together with accumulated legal costs the bill came to more than £30,000.

Magistrates had previously ordered Mr Lama, who ran the Memlings Grill restaurant in the Agora Centre, Wolverton, to make weekly payments to pay the overdue rates but he failed to keep to the court order and was found guilty of wilful refusal to pay his business rates.

A spokesperson for Milton Keynes Council’s debt recovery team said: “We do not take this action lightly and it really is a last resort. But where people choose not to pay their business rates – particularly, as on this occasion, when they have been given extra time to pay – we have to take enforcement action.

“It is not fair on other businesses that pay their business rates on time and they play a vital role in helping to fund vital council services.”

The council advises any business facing difficulty in paying business rates on time to contact its revenue services department.