Skip to content
14.3°C
05 Jul 2022
x
Latest NewsRegionalMilton KeynesRadio station aims to be ‘the glue that binds the community’ 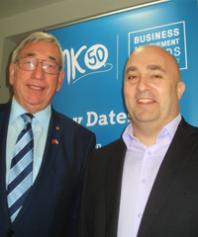 The ciry has a population of more than 250,000 and growing. Mr Dorrington said MKFM’s aim is “to become the glue that binds the community”.

Gaining an FM licence had seen audiences increase tenfold with thousands more following on social media. The strategy, he said, is to build online and broadcast audiences.

Mr Dorrington (pictured with MKBLP chairman Dr Philip Smith) added: “The number of people listening has increased along with the business opportunities and we are making the most of them.

"We must sustain ourselves as a business, building revenues, selling advertising and attracting sponsorship.”

The station wants to grow its current handful of staff to cover more events and news, including business news he said.

MKFM has a business news slot and is supporting the Milton Keynes Business Achievement Awards 2017 run by MKBLP and now attracting entries for the dozen award categories.

He added: “In the radio industry there is a lot of talk about providing more listener choice but not a lot about how to maintain local output. In Milton Keynes much of the media landscape is owned by organisations from outside the city and not by those who have first-hand knowledge of and a passion for Milton Keynes, and who know what a great place it is.”

Dr Smith described MKFM as a growing business and a community asset.

He added: “We are also pleased to have MKFM on board for MK BAA 2017, encouraging local businesses to enter and to be there on the night broadcasting from what will be a great event.”