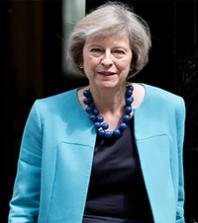 The words were in response to a letter sent by city MPs Mark Lancaster and Iain Stewart. The two recently sent a pack of limited edition MK50 stamps and invited Mrs May to Milton Keynes to join the birthday celebrations.

In the letter, Mrs May says: "The legacy of the city is marked with so many fantastic moments of British history, from the establishment of the Open University to the more recent progress in autonomous vehicles testing and the ‘internet of things’ network trial. "

She adds: "[Milton Keynes] is the focus of a National Infrastructure Commission inquiry designed to identify ways in which the corridor’s enormous growth potential can be fulfilled. The government eagerly awaits its outcome and stands ready to do all it can to support this growth. "

The PM also leaves open the possibility of a visit suggesting she will try and find an opportunity.

In a statement Mr Lancaster and Mr Stewart said: “This shows Milton Keynes is being noticed at the very top of government.

“Our 50th anniversary has given us the opportunity to bang the drum about our successes and reaffirm our ambitious for the future.

“As we come to the end of the 50th year it is important we keep that momentum going.”