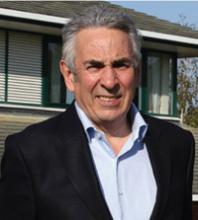 Milton Keynes
John Duggan (pictured), who retired as chair of Milton Keynes Parks Trust in 2011, is to head the Milton Keynes Development Partnership.
The government agreed the transfer of land, assets and responsibilities from the HCA to Milton Keynes Council in a groundbreaking deal worth £32 million late last year.
The move puts Milton Keynes in control of its own growth agenda, with sole planning powers over the whole borough in the hands of locally-elected representatives for the first time.
Council leader Cllr Andrew Geary, who announced the appointment at the Cabinet meeting just before Christmas,  said: “The Appointment Panel has made a good choice. I am confident that John Duggan will provide strong leadership for the new board.”
One of Mr Duggan’s first tasks will be to work with the councillors already appointed to the MKDP Board to identify four more independent members to bring the board to full strength.
The roles will be advertised locally and nationally early in the New Year.
15