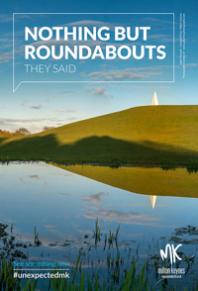 The #UnexpectedMK campaign highlights some of the unexpected views, activities and architecture that Milton Keynes has and turned these concepts on their head.

The campaign initially will roll out across the London Transport system including Euston mainline station and at targeted underground stations. The year-long plan will also include an online presence, regional radio campaign and a TV advertisement in 2017.

The campaign is supported by Milton Keynes Council. Pam Gosal, head of economic development and inward investment, said: “We are incredibly excited about this campaign and are thrilled to have been able to partner with DMK to deliver it.

"We know what a brilliant place Milton Keynes is to work, play and live in and now this campaign is showing the rest of the world. We cannot wait to see it develop.”

Destination Milton Keynes chief executive Steven Gordon-Wilson added: “For too long, Milton Keynes has been the butt of the joke. Times are changing and this campaign is already doing great things to change people’s ideas of our amazing city.”

Get involved on social media and use the hashtag #unexpectedMK via the Destination Milton Keynes Facebook page or Twitter feed.