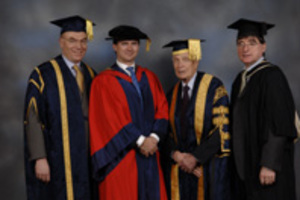 He achieved a Business Studies degree at the university before completing a Masters in Business Administration at Exeter University.

Mr Lancaster had a varied career before entering politics, serving briefly as an officer in the Queens Gurkha Engineers in Hong Kong before returning to Kimbolton to work in the family firework manufacturing company.

The MP, elected to Parliament in 2005 and promoted to the Whipâ€™s office in October last year, continues to serve in the Territorial Army as a major.

He spent last yearâ€™s Parliamentary summer recess on active service alongside British troops in Afghanistan â€“ the third time Mr Lancaster had volunteered for active service since 2000, having previous served as part of the NATO peacekeeping force in both Kosovo and Bosnia.