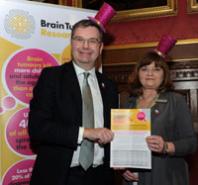 The Milton Keynes South MP is pictured with the charity’s chief executive Sue Farrington-Smith at an event held in the Speaker’s House at Westminster to mark the month of awareness and the charity’s Wear a Hat Day which takes place next Friday (March 31).

The event provided a platform for guests to talk to MPs about how they can help boost research into the disease.

Mr Stewart is a long-time supporter of Brain Tumour Research’s work and has campaigned in Parliament for greater awareness of brain tumours and increased funding for research into a cure.

He said: “It is essential that the UK leads the way in investing in research into brain tumours. There is currently not enough investment into treatments and the basic understanding of this awful disease and the UK should embrace funding and new ways of fighting this disease.

“I hope that Brain Tumour Awareness month is a success in raising the public’s knowledge and funding for this devastating disease and I would like to thank Brain Tumour Research for all they have done in organising events across the country.”

Customers at its centre in Knowlhill have been making donations and staff have been encouraging visitors to take part in Brain Tumour Research’s UK-wide fundraising event, Wear A Hat Day next Friday (March 31).

Centre manager Serena Lawrence said: “We were shocked to discover that brain tumours can be so deadly and that they claim the lives of more children and adults under 40 (who are often parents with young children) than any other cancer.”

Wear A Hat Day will see schools, workplaces, families and individuals across the UK fundraising and taking part in all manner of hat-themed fun events to raise awareness of brain tumours and help fund life-saving research. Funds raised through 2017’s event will develop the charity’s network of world-class brain tumour research centres in the UK.

Mr Newman is awaiting treatment for his second brain tumour.