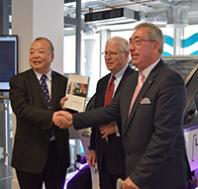 Milton Keynes Business Leaders Partnership hosted the visit by more than 20 representatives of the property, construction, technology, investment, education and media sectors in the city, which is situated north of Hong Kong and is one of the fastest growing in China and in 2016 had a GDP of $294 billion.

The trip to the UK was organised by the China International Capital Innovation Research Institute and Tim Cullen Associates.

Mr Cullen said Milton Keynes was the group’s first choice of destination outside London as it represented much of what has made Shenzhen an economic and technological powerhouse.

Milton Keynes was chosen because of its work towards becoming a Smart City, as a test-bed for autonomous vehicle technology and its position as the hub of the developing Oxford-Cambridge Corridor.

At a luncheon held at Transport Systems Catapult, Pan Jun, Executive Chairman of the Board of China Fantasia Holdings, a major Chinese property company, said: “From what I have seen ‘Shenzhen and Milton Keynes are genetically the same”.

Mr Pan said he looked forward to welcoming a return visit to his city and particularly to see the many young and very small technology companies from Milton Keynes there.

Earlier the Deputy Mayor of Milton Keynes Cllr David Hopkins welcomed the party and also drew on the parallels between Shenzhen and Milton Keynes as new and growing cities, though he said some comparisons were difficult as the Chinese city had grown in barely 30 years from a small fishing village into an urban metropolis of 12 million people.

Other stops on the visit, which received comprehensive coverage from television and radio channels, included Bletchley Park and The Open University.

MKBLP chair Dr Philip Smith said: “We have been delighted and honoured to welcome our friends from China and hoped that they felt at home in Milton Keynes.

“MK Business Leaders is confident that we can grow strong relationships through new partnerships in Shenzhen, and together share in the fantastic success of our respective cities.”

In January 2017 MK Business Leaders announced a trade link between Milton Keynes and Dubai and the UAE, which is already generating potential business leads for MK companies and is part of a MKBLP strategy to position Milton Keynes at the forefront of developing new trade opportunities post-Brexit.