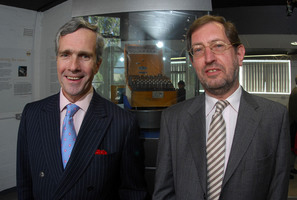 The trustees are working to secure a long-term future for Bletchley Park, where the pioneering work of Alan Turing and the other Second War War code-breakers responsible for breaking Enigma, the cipher used by German military and intelligence communications, was carried out.

The board aims to raise sufficient funds not only to restore the parkâ€™s buildings but also to create a world-class heritage and educational centre.

Dedicated teams have spent years rebuilding both the British Turing Bombe, effectively an early form of computer which enabled the code-breakers to crack the Enigma codes and which can now be seen in action at the Park, and Colossus, a more advanced machine which enabled Bletchley Park to decode messages encrypted by the much more complex Lorenz machine used by the German Army High Command.

Mr Brookshaw, pictured (left) with Bletchley Park director Simon Greenish, said: “I take the role seriously as a real part of British history, which helped us win the war by decoding vitally important German military communications, is in danger of being lost. Bletchleyâ€™s influence extends much further than its role during the war. Teams based there were responsible effectively for developing the forerunner of the modern computer.

“Currently Bletchley Park is just about generating sufficient income to pay for its own upkeep, although some of the huts where the code-breakers worked are in a terrible condition and require significant expenditure.

“The Trustees want to raise sufficient funds not only to restore the buildings at Bletchley Park but also to create a museum dealing with the code-breaking history of Bletchley Park and with its place in computing history where the forerunners to the modern computers were created.”