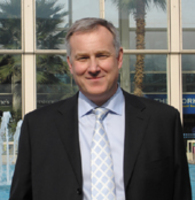 Customers were queuing as early as 3.30am. When the doors opened â€“ in some stores as early as 5am and 6am – , retailers reported taking up to Â£1,000 per minute.

Centre director Robert Goodman (pictured) said that the last-minute Christmas shoppers had more than made up for a slow start to the festive season.

â€œThe sales built on that momentum with shoppers attracted by the department and major store offers at thecentre:mk generating our biggest ever footfall in a single day,â€ he added.

One of the centreâ€™s new seasonal lettings, Calendar Club, reported its highest turnover from thecentre:mk outlet, marking it as their most successful out of 1,000 outlets worldwide.