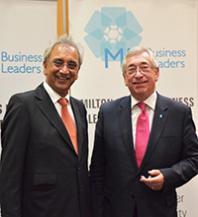 Colleagues from different backgrounds will come up with new ideas that enhance team working and can help a business to grow, he said.

The word ‘diversity’ inevitably produces different reactions but is invariably a good thing and should be encouraged.

Lord Popat, a former government minister, was speaking to an audience of senior business figures at a dinner organised by Milton Keynes Business Leaders Partnership.

In work and business diversity should be welcomed, he said. “People who come from different backgrounds have different opinions and ideas. Organisations themselves thrive on ideas and the more the better.”

In his own office, his chief of staff went to Cambridge University while his parliamentary assistant was made homeless when he was young. “Both have overcome adversity to become successful and when we have team meetings we are all equal,” he said.

Lord Popat, whose family was expelled from Uganda in 1971 by its dictator president Idi Amin and who worked through his night school accountancy qualifications as a waiter in a Wimpy bar, spoke passionately about diversity and the role it can play in business.

He said the word diversity produces different reactions. “In the public sector it is championed with initiatives and legislation. In the private sector, particularly where there is not a large HR department to worry about these things, diversity is one of those scary and off-putting words like inclusion, accessibility and empowering that seems to mean more paperwork and less time to concentrate on profit,” he said.

“I am not here with an intricate knowledge of government diversity schemes or to sell how businesses being more inclusive is good for society. I am here as a businessman saying that I think diversity helps make businesses more profitable because however good we are as individuals, there are hundreds of ideas we have never considered.

“Whether it is young mothers returning to the workplace, young people without the skills but a hunger in their eyes, or someone like me who comes from overseas, each has potential and big ideas waiting to be unlocked.”

Lord Popat asked his audience: “If you met me when I arrived in the UK in 1971 as a Ugandan Asian with no qualifications, little business experience and challenged by the English language, would any of you have given me a job?

“I suspect, if we are being honest, the answer would have been no. But – and this is the crucial bit – I did have potential.”