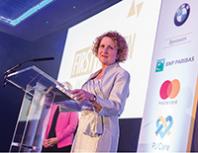 The judges described Elizabeth Sheldon pictured as a “stand-out candidate” with a “fascinating career route”. They added: “She works tirelessly to help keep us safe, perhaps in a way we do not always see in terms of cyber security.”

In her role at Evidence Talks, she works with military, law enforcement and intelligence chiefs across the world as well as with corporate and legal clients.

Evidence Talks achieved record sales last year, including its biggest ever order from a US government agency.

Mrs Sheldon said: “’I am honoured and humbled to have won this prestigious award, the quality of the finalists was so high.

“The number of women running businesses in the security sector is still in the minority and we are working hard to encourage and nurture more women in this area to ensure this number continues to grow.”

In her acceptance speech, Mrs Sheldon said: “I also want to recognise the wonderful work of our diligent police officers, military personnel and other operators who are able to keep us safer through the use of technologies such as SPEKTOR.”