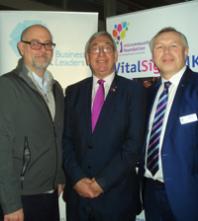 He said: “Vital Signs is a valuable resource for the city and one that the business community can also use in its decision-making and strategies.”

MKCF is a grant making charity which connects people to projects to create positive change in the community.

Mr Gamber, MKCF’s director of programmes, told MKBLP members and guests at a recent breakfast briefing that the annual Vital Signs Update and larger triennial report draws on statistics from the Office of National Statistics, local authorities and data in the public domain, as well as online surveys and focus groups with local residents.

“Too often statistics have a national focus,” he said. “Vital Signs has a local focus, telling us what is going on in our own community and where the gaps in local provision are.”

The theme for the latest 2016 report is A tale of two cities, showing that while Milton Keynes thrives in many ways, too many families remain in financial hardship.

Areas covered include Disadvantage and Poverty; Health and Wellbeing; The Local Environment; and Crime and Safety, with others more relevant to the business community. Snapshots from these include:

The Economy: Worker productivity is 18% greater than the national average and 46% of local companies are in the Information and Technology sectors compared to 34% nationally.

But while the median weekly income at £419 is the same as the national median, the average weekly income in Milton Keynes at £577 is tenth highest in the country and possibly skewed by the highest salaries locally.

Transport: Milton Keynes has 200 miles of dedicated cycle and walking routes and 500 Santander hire bikes. Bus travel is up 10% in three years but many people surveyed said buses were expensive and did not run when and where they wanted to go to work.

Employment: Milton Keynes has an estimated workforce of 143,750 with 79% in work compared to the national average of 74% and 21% work part-time. The unemployment rate is 5% compared to 5.4% nationally.

Education: Each year 55% of the 3,500 students leaving school go on to higher education compared to 49% nationally.

MKCF chief executive Ian Revell said in 2017 the charity will run Vital Thinking sessions to help it direct funding at key areas more effectively, and he reminded guests that the full data is available online at www.mkcommunityfoundation.co.uk.

Mr Smith described their presentation as “powerful and thought-provoking”.