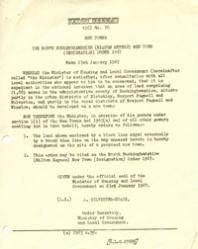 The council is inviting companies to design a modern version of the original designation document (pictured), signed in January 1967.

The new charter, dubbed the ‘Magna Karta’ will be used extensively in the council’s programme for the 50th anniversary which it is currently drawing together with partners, based around:

Valuing the Past. A look at what Milton Keynes has become over the past five decades, kicking off on the 50th anniversary on January 23 2017.

Celebrating the Present. 50 days of celebration from June 23 to August 12 2017, with festivals, events and fun activities.

Looking to the Future. A series of talks and conferences, expected to have international appeal, looking at the future of the global urban environment with learnings from Milton keynes.

Themes for the celebrations will include MK at Play, Green MK and New Town, Future City.

Milton Keynes Mayor Cllr Keith McLean said: “I moved to the area in 1977 and Milton Keynes was already being looked at with interest – and some envy – as the place where ‘things happen’.

“In the intervening decades I have seen the city and the borough grow from strength to strength, surpassing even the vision of Milton Keynes’ original founding fathers.

“We will be looking for a design for the Magna Karta that best reflects Milton Keynes’ uniqueness, its past as a new town and its future role as an international city.

“We aim to celebrate locally, and share with the world that Milton Keynes is an amazing place to live, work and visit.”

The design deadline for the Great Charter is December 14, with the winner announced shortly after. All shortlisted designs including runners-up and the winning design will be exhibited at CMK Library for six weeks from January 6.

For more details and to apply, visit www.milton-keynes.gov.uk/MK50.