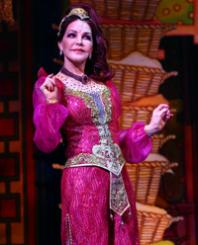 And an almost full house was certainly in the Christmas spirit at Aladdin, this year’s pantomime at Milton Keynes Theatre.

Gary Wilmot steals the show as a totally over the top Widow Twanky (complete with unfortunate slip of the hat and an impromptu alopecia ad lib by way of recovery), with Kev Orkian as Wishee Washee not far behind.

There is also an unexpected, breathtaking and spectacular balloon escapology scene in the second half – I won’t spoil it for those who have not yet seen the show – but you, like the audience on the night we saw the show, will be left truly speechless.

Kev Orkian, who has previous experience of the Milton Keynes pantomime audience, and Gary Wilmot both are masters of the pantomime craft, able and willing to get the audience involved as soon as they appear on stage.

And the singing this year is top notch. You’d expect that from a lead singer in Ben Adams and he is ably assisted in that department by Aimie Atkinson, winner of a BBC Voice of Musical Theatre award, as Princess Jasmine.

All credit too to Wayne Sleep who, in his late 60s, still puts on a mean and energetic performance of song and dance of Putting on the Ritz.

There is just as much entertainment for adults as for the younger members of the audience, with a few sly innuendos and several 1960s and 1970s rock and pop classics.

There’s a particularly good performance of the Rolling Stones song Sympathy for the Devil by Marc Pickering as the evil Abanazar.

Priscilla Presley, as the Genie of the Lamp, is the headline performer this year and sticks to her task in the face of regular references in the script to the titles of songs by her late husband Elvis.

But she’s up for the challenge and clearly is enjoying herself every bit as much as her fellow cast members.

When no one else can understand me

As you would expect, there are sound imbalances…

When everything I do is wrong

You give me hope and consolation

But the audience are forgiving…

You give me strength to carry on

and cheer and boo in all the right and traditional places.

At the end, the rapturous applause is proof positive of pantomime’s enduring appeal as a very British but much loved entertainment

Aladdin is at Milton Keynes Theatre until January 10. For details, visit www.atgtickets.co.uk/miltonkeynes