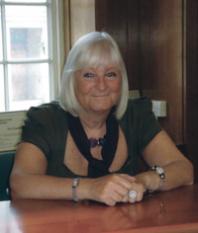 Bedford
Cheryl joined the Chamber in 1988, the year the £1 note ceased to be legal tender. Kylie Minogue topped the charts with her hit I Should Be So Lucky.
She arrived at the Chamber offices, after a career in industry, as an export supervisor.
“The Chamber was still very much an ‘old boy’s network,” she recalls. “Women worked primarily in service roles – quite a contrast to 2013 when women make up a significant percentage of our members and we have our first female chief executive in our 136-year history.”
She made her mark by setting up and leading trade missions to a number of countries, including some not hospitable to women in business.
“I view setting up the trade missions as the highlight of my years with the Chamber,” she says. “It was hard work – I was often on call around the clock – but I made some firm friends among the businesses I accompanied and saw parts of the world I never dreamt I’d see.”
Cheryl was promoted to commercial services manager with responsibility for export, membership, marketing and policy and representation.
This breadth of experience meant she was the ideal choice when the organisation needed an acting chief executive. Cheryl took on the role in 2008, becoming chief executive officially in 2010.
In 2011 she was awarded the MBE for services to business. She attended Buckingham Palace with her husband Ken and daughters Donna and Kelly for the investiture presided over by HRH the Prince of Wales.
The world of business, as well as the Chamber, has changed markedly in the past 25 years.
“I’ve seen monumental changes,” she says. “When I started, one of our major activities was our telex and fax service as few businesses had the equipment. All letters were individually typed and we had our own printing press.
“The internet has changed everything and like any business we’ve had to adapt. Our current team is far smaller with many old roles now defunct. Job roles are less fixed and everyone has to be prepared to multi-task.’
So what’s kept Cheryl at the Chamber?
‘If you’d told me then I would still be at the Chamber 25 years on, I wouldn’t have believed you,” says Cheryl. “Why did I stay? I think over the years I developed a real passion and belief in what we were trying to achieve and I’ve enjoyed the camaraderie and real family feeling that’s always been part of the Chamber.”
10